On October 30, 2003, the Fairfax County School Board awarded a contract for the first building-wide renovation of Groveton Elementary School. The $7.3 million renovation, performed by general contractor Whitener & Jackson, Inc., brought extensive changes to Groveton. The open classroom model, upon which Groveton was originally designed, gradually fell out of favor during the 1980s. The renovation enclosed these spaces into separate classrooms.

Continuing a trend begun in the 1980s, Groveton's student body became even more racially and ethnically diverse during the early 2000s. In 2003, for example, statistics show that Groveton was 18.7 percent Asian, 32.7 percent Black or African-American, 23.2 percent Hispanic, 6.3 percent Multiracial, and 18 percent White. Student enrollment at Groveton was also on the rise during this time. From 2006 to 2016, enrollment swelled from 540 students to approximately 800. The enrollment spike necessitated the move of an eight-classroom modular building from Beech Tree Elementary School to Groveton during the summer of 2011.

Principal Lamb began her career with FCPS in 1979, and served as a special education teacher, assistant principal, and principal. During her time at Groveton, Principal Lamb worked to increase parental involvement in school activities, and encouraged staff to continue their own education and expand their teaching styles. She was the recipient of the Greater Washington Reading Council's 2002-03 Principal of the Year Award, and was a Fordham University School Change Award finalist in 2004. Under her leadership, Groveton Elementary School was named a Project Excel Gold Medal School from 2000-02. Principal Lamb retired in 2007 after 38 years in the education profession.

Richard "Rich" Pollio began his career in the education profession in 1991 through Teach for America as a third grade teacher at Roosevelt Elementary School in Compton, California. He began his career with FCPS as an English for Speakers of Other Languages Teacher at Belle View Elementary School, followed by a stint as assistant principal at Waynewood Elementary School. In 2007, he was appointed the 15th principal of Groveton Elementary School. Principal Pollio left Groveton in October 2014 to become the Director of English Learner Services for FCPS. He was succeeded briefly by Stephen Hockett who served in an interim capacity until the appointment of Principal Swoger in December 2014. 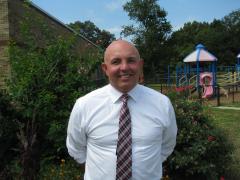