By the late 1960s, Groveton Elementary School was beginning to show its age. The size of the school lot prohibited expansion of the building, and Fairfax County Public Schools (FCPS) administrators felt the school was completely outdated and was no longer adequate to support the needs of the community. In March 1969, the School Board authorized the construction of a new Groveton Elementary School, and directed that the building be modeled after the new Hunters Woods Elementary School in Reston. An emerging trend in the education field called "open classrooms" was quickly rising to prominence in Fairfax County, and Hunters Woods was one of the first open classroom schools built by FCPS. Open school classrooms were built without doors and were clustered around "pods" that could be divided with moveable partitions into separate learning areas. A report to the School Board in January 1971 indicated that the architectural plans for the new 990-pupil capacity Groveton Elementary School were complete, and that it would take 14 months to construct the building. On March 25, 1971, the School Board awarded the contract for construction of the new school to Burroughs and Preston, Inc., at a cost of $1.38 million.

Groveton Elementary School, at its current site, opened its doors to students for the first time on September 5, 1972. Utilizing the open classroom model, Groveton was divided into several learning areas where a group of classes shared space. Teachers worked as teams with children grouped according to their differing abilities. The learning areas, or pods, at Groveton were named for presidents of the United States: Jefferson, Madison, Monroe, Taylor, Washington, and Wilson.

The youngest children were assigned to group Apple Blossom or Cherry Blossom.

For Principal Bill Zepka, teachers, and students, the move from Memorial Street to Harrison Lane brought with it new opportunities and challenges. One challenge Principal Zepka later recalled was memorizing the names of all the students, a task he undertook each of his 18 years as principal; one that was made more difficult by the increase in enrollment. "It's very important that I know all their names; all 640 pupils, kindergarten through sixth grade. I have to take the picture book home every night," said Zepka in 1984.

Principal Zepka envisioned Groveton as a community school, a place dedicated to serving the entire community from pre-school aged children through adults. To that end, Principal Zepka initiated several new programs at Groveton Elementary School in the 1970s. During the 1973-74 school year, he started a senior citizens nutrition program for low-income elderly residents.

The elements in a community school are one where you involve the community from preschool to adult education. And it has to be easily accessible to the entire community. When I was appointed to Groveton Elementary School, I had that in my background— my community school philosophy—and I initiated a preschool program here at Groveton Elementary. We initiated some adult education courses through the County Education Department. We also established the first senior citizens program here at Groveton Elementary School. It was the first senior citizens nutritional program operated in the state, and was the first one, and the only one I think to this day, that's really operated full-time in an elementary school. It went from about three participants to about 65.
~ Principal Bill Zepka, October 1987

A School of Innovations

Did you know that Groveton was one of the first public schools in the eastern United States to offer programs for children with autism? In 1974, there were only eight special education classes in the entire Fairfax County public school system for students with autism, one of which was housed at Groveton Elementary School.

Also during the 1970s, Principal Zepka established the first co-op preschool program and the first before-and-after-school day care program for working mothers in Fairfax County. The FCPS English for Speakers of Other Languages (ESOL) program, originally called the English as a Second Language (ESL) program, began in 1975 with 275 students, most of whom were refugees from Vietnam. Groveton Elementary School became an ESL cluster site in October 1977.

During the 1970s and 1980s, Groveton Elementary School offered a wealth of extracurricular and co-curricular activities for students. In fact, Groveton piloted the first elementary after-school recreation program in Fairfax County. Below are a small sample of the activities and student groups found in our yearbooks from this time period.

One fondly remembered after-school activity at Groveton is roller skating in the gymnasium. Alumni from the 1980s recall roller skating being held on Mondays after school and every other Friday night. Movie nights, a tradition which dates back to at least the 1940s, was another favorite activity.

When you walk in the door of Fairfax County's Groveton Elementary School you see a pair of live doves nuzzling each other in a cage. Following the path of tiger paws down the hall, you pass a cafeteria where gray-haired men and women who sat in wooden desks learning their ABCs 60 years ago are eating pizza with fifth-graders. And inside the office across the hall, you find the man recently named Virginia's first National Distinguished Principal, Bill Zepka, surrounded by a five-foot-tall stuffed panda and scores of other souvenirs pupils have brought their principal from ventures around the world and Fairfax County.
~ The Washington Post, October 4, 1984.

In 1986, Cynthia Buck was appointed the 12th principal of Groveton Elementary School. At this point in time, Groveton was one of the most racially and ethnically diverse schools in Fairfax County, with a student body that was 53 percent white, 26 percent African-American, 15 percent Asian, and 6 percent Hispanic.

Under Principal Buck's leadership, the Academy Program was initiated at Groveton to help new students who recently arrived to Fairfax County become acclimated to the school and the surrounding community.

A Glimpse Back in Time

During the 1992-93 school year, Groveton Elementary School students were the recipients of a new playground courtesy of the Parent Teacher Association (PTA). 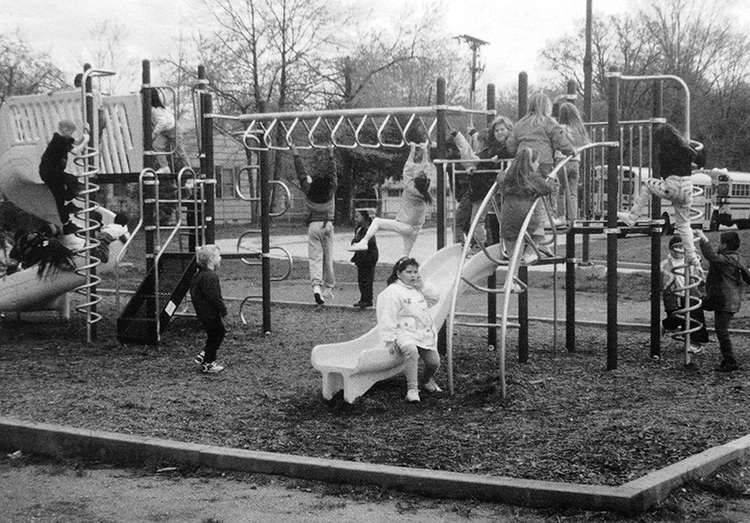 In February 1997, Principal Thompson, Assistant Principal Louise Mannarino, and ESL teacher Ivette Colon made a presentation to the Fairfax County School Board about Groveton's ESL Parents' Committee. Ms. Colon described the committee and her work with children and their families who came to Fairfax County from a wide range of cultural, educational, social, and economic backgrounds, and had varying degrees of English proficiency. The committee had created a resource book with strategies and techniques designed to encourage parental involvement, copies of which were distributed to ESL teachers throughout Fairfax County. School Board members expressed their gratitude to the Groveton community, noting that parental involvement in education is vital to the success of students.

During the summer of 1997, Elizabeth A. Henderson became the 14th principal of Groveton Elementary School. Before coming to Groveton, Ms. Henderson had been a principal at Clermont Elementary, Great Falls Elementary, and Cheney Elementary on Fort Belvoir.

In 1999, Christine Lamb was appointed principal of Groveton Elementary School. She led Groveton for eight years until her retirement in 2007.